Minneapolis, MN 4/02/20 – Attorney Dan Brazil, owner and founder of the personal injury law firm, Brazil Law Group, has become the newest member of Bike Law. This addition makes Minnesota the 20th state in the US to become part of the nationwide Bike Law Network.

“To qualify for membership, a candidate has to be a passionate cyclist, a proven bike advocate and community leader, a damn fine attorney, and a compassionate human who shares our unique approach to serving our community and pursuit for cycling justice,” says Peter Wilborn, founder of the Bike Law Network and long-time cycling justice advocate. “Of all of the many applications we receive, Dan is the only one in over a year to meet—and exceed—our requirements.”

Becoming part of the Bike Law Network is the latest step Brazil has taken to further his law firm’s bicycle safety and advocacy efforts. For several years now, Brazil has been a strong supporter and sponsor of Our Streets Minneapolis and Bike to Work Week. In 2019, he and his firm also sponsored the Greenway Glow and became members of the Midtown Greenway Coalition, a coalition of neighborhoods, organizations, and individuals who love and respect the Midtown Greenway and want to protect it.

Additionally, Brazil has held community events to provide educational opportunities about cyclist safety, rights and responsibilities. He is always seeking ways to expand cycling culture at home, in the office and in the community at large.

Says Brazil about his addition to Bike Law, “I am honored to partner with Bike Law. We are a group of bike accident lawyers who not only represent bicyclists injured in traffic crashes and in court but also advocate for the rights of cyclists. The membership has deep roots in the cycling community and cares about the work that we all do.”

With Minnesota state ranking third on The League of American Bicyclist’s Bicycle Friendly America program and with the number of people on bikes ever-expanding, there is an even greater need for more cycling infrastructure and cyclist support. Brazil states he will continue to further his educational and advocacy efforts for cyclists in Minneapolis, the Twin Cities metro area and throughout the state.

Brazil Law Group is the DBA of the Law Offices of Daniel J. Brazil, P.A., which is located in the heart of the Uptown neighborhood of Minneapolis. Headed by attorney Daniel J. Brazil, the firm is dedicated to representing individuals in personal injury and workers’ compensation cases. Brazil and his team represent clients throughout the Twin Cities and all across Minnesota.

Bike Law is an independent network of bicycle crash attorneys that began in 1998. The attorneys are well versed in legal matters involving bike crashes. They are also cyclists in their own right and are passionate advocates for bicycling safety and cycling justice. Bike Law Foundation, the non-profit arm of Bike Law, advocates for cycling justice and better biking around the country through legal advocacy, legal reform and pro-bono representation in impact litigation. 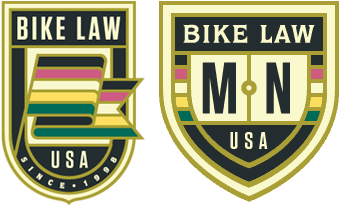